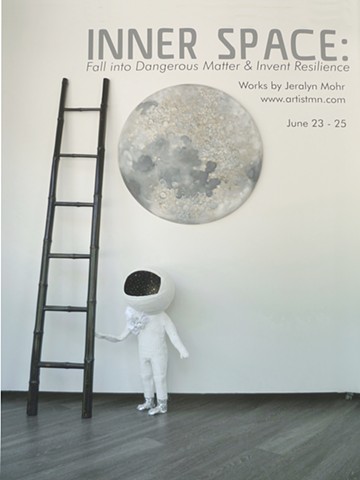 This is a selection of a greater body of work I call Inner Space. Through the visual metaphor of outer space, I explore the experience of sexual assault, and the complicated, unwanted journey into the depth of its effects. Inner Space documents looking inward to process sexual violence. I document seeking legal justice, journal disappointments and progress, illustrate memories as they resurface, while using the work as a location for the exchange of challenging, but healing dialogue.

I use drawing, painting, diorama in miniature, sculpture, photography and incorporate PTSD treatment methods. These are all unified by the visual themes of gravity, suspended states, celestial bodies and space exploration. Space becomes a metaphorical environment for the hostile internal void carved out by trauma within the body and psyche, an area both dangerous to revisit and uninhabitable. The body becomes a storage site for these experiences. Shame and secrecy keep the truth from being processed, as this stored experience, unaddressed, can become chronic illness standing in the way of integration and healing.

One inspiration was a second hand book called The Fairburn Children from a dear friend that knew I would relate. I saw dozens of alarming black and white photographs meant to serve as figure reference for artists. There were girls for pages being aggressively jostled about in a blank white oblivion, hair and skirts flying in front of what seemed like a pedophile’s gaze. It immediately felt familiar. The sensations of being used, controlled by gravity, feeling choice-less and without grounding, yet afraid of what landing might mean, or worse, staying in some suspended state, unable to reconnect. I drew my falling girls from that source material with charcoal and apparent erasure marks to intensify the frenetic sense of motion and anxiety. The tension of opposites in these figures interests me, because they teeter on elation and torture. So I then drew connection between these figures and small talismanic collages of astronaut figures by giving one of these falling girls a space suit on vellum to layer over the drawing. The suit has all of its tethers cut, loose like raw nerves or umbilical cords. This is in a sense freedom, yet intense fear and vulnerability are simultaneous…this illustrates a moment where independence, dependence and codependence are transparent layers. She clenches flowers to provide herself with the calming aroma and beauty in protest to that harshness of the void. These flowers are a reoccurring icon in this work.

With the dioramas, I am translating an internal psychological space into a more literal one. These allegorical images are visions that surfaced during EMDR treatment of PTSD symptoms. The intimacy of smallness lends itself to an internal landscape. For example, the miniature vintage astronaut that brings flowers to a chrome coffin of the inner child confronts loss of self and grief suspended, preserved in miniature. I constructed a manufactured system of grids and zip ties to surround the scene. It contains the drama with something cold and fabricated as the pressure of society attempts to sanitize, structure and dispose of it in the oblivion of uncomfortable things.

There is a common theme of ambivalence in this work. Flowernaut Helmet is constructed out of cold plaster strips, textured and painted like the moon while the lush, feminine beauty of the lining blooms with white peonies and roses in contrast to the outside. The wearer feels surrounded by the seductive inner environment, while simultaneously isolated in a hard, unapproachable, distant shell. The shell is made of only a few layers of impregnated plaster strips. Fragility is always present. This feminine astronaut archetype is vulnerable and strong. She goes on her journey, often alone, defying gravity and in a sense defies circumstances and current beliefs. She walks in the duality of connection and disconnection.